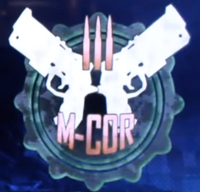 The Marauder Corps, or MCOR, is a small part of a larger Militia brigade based out of the Freeport System. Sarah is a member of the MCOR.

The Frontier Militia represents the military arm of the Frontier systems' territorial defense pact. The Militia is a loosely governed mishmash of homesteaders, bandits, mercenaries, and pirates, all rising up as 'citizen soldiers' when the need arises. Many homesteaders have taken on a ‘can’t beat ‘em, join ‘em’ attitude regarding working alongside different criminal groups. Naturally the people in this melting pot don’t always see eye to eye on how to deal with the IMC’s exploitation of the Frontier, but they are unified in fighting against it.

The Militia is loosely divided into Brigades. Each Brigade is responsible for fighting in an assigned section of Frontier territory, which might span as far as several planetary systems. The Marauder Corps, a.k.a. the M-COR, is a small part of a much larger Brigade tied to the Freeport System that is largely comprised of pirates. Although some brigades are little more than vast pirate organizations, the Militia as a whole has enough resources to be a real obstacle to the IMC's ambitions on the Frontier.

The Militia often claims that direct action against the IMC is in the best interests of the homesteaders whom they allegedly represent, but not everyone on the Frontier sees it that way.