Challenges are, besides XP, the main way in which Burn Cards, weapons, and other unlocks are granted. Each weapon has its own set of achievements, with their own set of rewards and requirements.

The Campaign in Titanfall is an integrated experience. Unlike other single player experiences, the Campaign Missions are integrated into the multiplayer game itself, with the story playing out via multiplayer matches. The campaign missions are the same for both groups, though the results are vastly different, and the content in terms of audio and visual change as well.

The Refueling Raid is the first campaign mission in the story mode of Titanfall. The game mode is Hardpoint Domination, on the map Fracture.

The Colony is the second campaign mission in the story mode of Titanfall. The game mode is Attrition, and the map is Colony.

The Odyssey is the third campaign mission in the story mode of Titanfall. The game mode is Attrition, and the map is Relic.

Get Barker is the fourth campaign mission in the story mode of Titanfall. The game mode is Attrition, and the map is Angel City.

Assault on the Sentinel[]

Assault on the Sentinel is the fifth campaign mission in the story mode of Titanfall. The game mode is Attrition, and the map is Outpost 207.

Here Be Dragons is the sixth campaign mission in the story mode of Titanfall. The game mode is Hardpoint Domination, and the map is Boneyard.

The Three Towers is the seventh campaign mission in the story mode of Titanfall. The game mode is Attrition, and the map is Airbase.

The Battle of Demeter[]

The Battle of Demeter is the eighth campaign mission in the story mode of Titanfall. The game mode is Hardpoint Domination, and the map is Demeter.

Made Men is the Ninth campaign mission in the story mode of Titanfall. The game mode is Hardpoint Domination, and the map is Corporate. 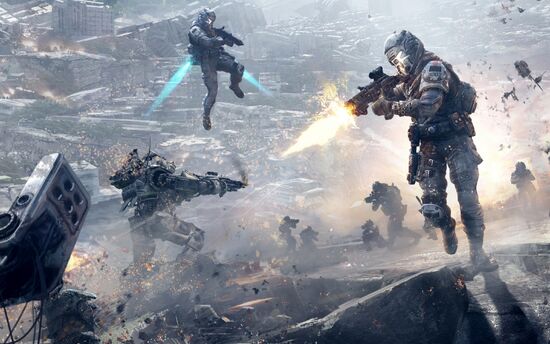 Regeneration is the method of generation perks in Titanfall. Though the maximum level is 50, this will help you get challenges or earn XP faster than usual.

Regeneration is essentially a leveling mechanic; after certain challenges and requirements, you will be shown the following text:

Warning! You will lose all that you have unlocked and be reset to level 1. All challenges will be reset. However, you will earn XP at an accelerated rate of [XP RATE] as a [NEXT GEN NUMERIC] gen Pilot. You will retain your Burn Card collection, and the Ogre and Stryder Titans if you unlocked them. You will get a unique chip indicating to others your Gen status.

Years of battle have taken their toll. We can regenerate you... at a cost.

Your body can be restored. But your memory and your experience...all will be lost.

When you awaken you will respawn a [next level] generation Pilot.

You will be better, sharper, acquiring experience even faster than before.

For those who wish to know approximately how far along they are, here's a list.

Game Modes are the way games are organized in Titanfall.

Hardpoint is the first of two confirmed game modes of Titanfall. A modified King of the Hill system, the fundamental point of this game mode is to capture the three points on the map, labelled A, B, and C. This gamemode is also very similar to king of the hill and domination style game modes from that of other first person shooters. Trade Sam Gagner 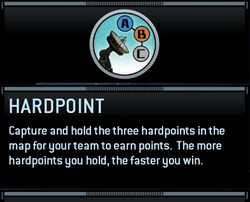 This mode combines elements that you'd traditionally see in a singleplayer campaign; Characters, stories, and cinematic moments fused into an online multiplayer match. The objective is to hold off the opposing team's forces in a team deathmatch style mode. Scoring points for getting kills on pilots, enemy AI, and Titans. The first team to reach the score limit wins the match. 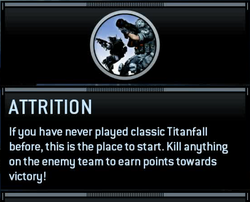 Last Titan Standing is a single life, battle-royale style gamemode. In this mode, you have one Titan, one death, and your goal is to eliminate the enemy team. All players start in Titans, and if you eject, you will not be allowed to call upon another Titan. 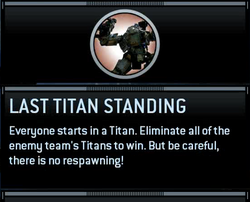 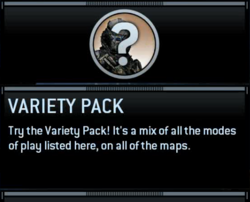 This mode is a round-robin mix of the aforementioned gamemodes. 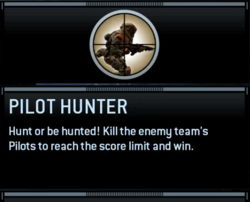 Team Deathmatch is the classic FPS gamemode of games like Quake and Team Fortress 2. Points are awarded by "team won" as opposed to total deaths like in attrition. 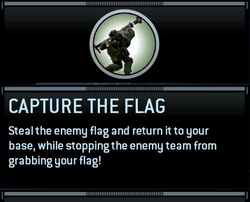 Capture the Flag is a classic game mode in which players protect their flag from enemy capture.

Meta (Titanfall 1) are a vital part of Titanfall, altering the gameplay by constraining the movement ability and strategy within each map.

Airbase is a distant moon of Demeter, and functions as a docking station for warships. It is equpped with "dog whistle defences", sonic emitters which force the wildlife away from the base. It features a large hill that grants tactical superiority, but also limits the mobility of Titans and Pilots on top.

When the IMC instituted martial law in Angel City, massive walls were built and a system of security checkpoints was created to divide the city into many smaller districts. The unfortunate residents of the Harbor District, now unable to move freely throughout the city, are only able to view the glittering skyline from afar. Pilots fighting in the city gravitate to the highly accessible rooftops, using them to cross entire city districts without ever touching the floor.

The new map, Boneyard, is a desert environment set amidst the ruins of an old engineering facility. Huge leviathan-like creatures wander the distant backgrounds, warded away from the battlefield with dog whistle-like apparatuses. Boneyard is the result of a malfunctioned dog whistle, with the tremendous bones of a fallen leviathan setting the surface-side stage for combat. Respawn says players can fight within the huge skeleton and even perch atop it and snipe. Indigenous flying NPC creatures can also swoop down to pester your allies and enemies, creating a livelier match. Down below the surface is the facility itself.

Corporate is the site of one of many Hammond Robotics factories built across the Frontier. Its facilities are responsible for producing vast quantities of Spectres for deployment by IMC forces.

Colony, like Lagoon, is based around a crashed mega carrier. Seized by the militia, this is one of the most famous lost elements of the IMC, being out of their reach both militarily and diplomatically.

Demeter is a critical fuelling station for IMC forces making the jump into the Frontier.

The IMC's discovery of fuel-rich veins beneath this once-beautiful community led to aggressive, systematic fracking of the area, turning it into a seismically unstable shell of its former opulence. Titans rule much of the jagged terrain, forcing Pilots to move through and take cover within the interiors of the abandoned buildings. The best Pilots will carefully time their Cloak usage for the precise amount of time that is necessary to move between the protective interior spaces, or use every available square inch of vertical surface to string together complex wall-run routes.

Lagoon is a location in Titanfall which betrays the warlike nature of its world. Once a peaceful, tranquile place, an IMC "megacarrier" crashed into it during an unspecified battle, destroying the area, and converting it into a de facto arena of bloodsheed between the powers that be.

Nexus is a backwater agricultural outpost on the planet Harmony that is sympathetic to the Militia.

Outpost 207 is a protected facility for the repair of capital ships. The splash text reads, "Militia leader MacAllan is especially keen to make an assault when IMC’s capital ship IMS Sential pulls in for repair, although no Outpost-protected facility has ever been breached before. An audacious plan to use a derelict ship as bait is hatched, but IMC forces are unlikely to be fooled quite so easily."

Overlook is a military prison complex, designed by the IMC as a staging area for the imprisonment of Militia "terrorists".

Parts salvaged from this old IMC shipwreck are sent into the valley below for further processing.

Part arms-bazaar and part pirate enclave, Smuggler's Cove is famous for its selection of mercenaries and black-market kits.

Runoff's environment is dominated by pipes and water.

Swampland features an abundance of trees and is located among the ruins of an ancient alien civilization.

War Games is set in the Pilot training simulator used in the game's tutorial sequence.